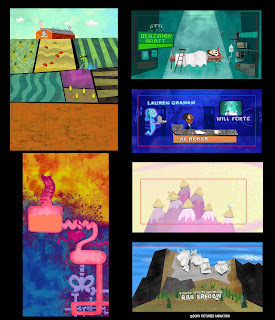 So Cloudy came out and thankfully it did well..YAY! Thanks to all that went and saw it.
Those of you that saw it may have noticed the 2-d animated end title sequence.A lot of people have been mentioning it and most recently there was a post on Cartoon Brew about it..with a link to an interview with the director Todd Hemker of Yellowshed.Sadly but not surprisingly, there is no mention of me in this interview...but more sadly..I seem to have been missing from the credits of designers(this has been corrected now..Thanks Justin!!!). Well this was most disappointing and I thought I'd have to write and explain exactly what I did on this thing anyway!!!HAHAH..
Basically...There were 3 designers for the look of this sequence. Justin Thompson(who production designed the entire movie), Paul Rudish, and myself.And I need to also add Mike Kurinsky here for color keying it all.. Originally, we wanted to actually create all the assets to the piece ourselves...but as we realized the schedule was ridiculously short..we had to relinquish some of the work to Duck Studios who was handling the production side of things(animation, etc).. It appears Soyeon Kim did an amazing job of finishing what we couldn't..Paul Rudish did most of the main character designs..I did a few and Justin did a few.. Paul basically boarded the sequence..and all of us did BG's...Justin and Paul were in charge of directing Yellowshed...and of course we were ALL working under Chris and Phil(the directors of the movie).I never got to meet any of my fellow workers at Duck because I would stay back at Sony and try to push out some more paintings.It ended up being very collaborative and the end result came out very impressive considering what little time everyone had. Check out the interview and then check out the sequence on youtube if you haven't seen it yet.
http://www.artofthetitle.com/2009/10/26/cloudy-with-a-chance-of-meatballs/

Here are some of the character designs and Backgrounds I painted for it. The BG's were done as assets and multiplane camera moves were going to be applied so they aren't really layed out to be looked at as non moving pieces of art...anyway..enjoy!
Posted by Chris Mitchell at 2:05 PM 10 comments:

CLOUDY WITH A CHANCE OF MEATBALLS!

It's finally happening. The movie I was so busy working on....is finally coming out!!!! YAY! It starts tomorrow Sept. 18. And I have to say..I've never been happier to have worked on a project. It came out AWESOME!!! Those of you who know me...know that I am NOT easy to please. Sure, there are some things I wish hadn't been edited out or killed by studio interference...but I can safely recommend it to anyone who likes real cartoons...funny ones..Not the ones that make you all sad with miscarriages or barrenness or whatever.No offense to any movie in particular but it seems to be a trend to get VERY serious with our animation lately.Nothing wrong with serious films but what happened to being funny? I like the funny ones. I like rubber hose animation and stuff you can't see in live action...More of that please! So everyone go see Cloudy and have fun and look at all the pretty stuff all the talented people made. And please stay for the end credits..because I designed them with my buddies Justin Thompson and Paul Rudish(I'll post some artwork from that soon).In the meantime...here's some screen graphics I designed for Flint's lab computers. These aren't in the "art of" book..they dissed me..haha..but hopefully you will enjoy.And please tell everyone you know to go see the movie! So we can make more good ones.
Posted by Chris Mitchell at 5:08 PM 12 comments: