Been really busy as usual lately. Apart from working on the vis dev at Disney Feature.....I recently just finished 6 pages of comix for a group comic book titled Exquisite Corpse. This project was originally proposed years ago and it is finally nearing completion.

Honestly, it was quite difficult to do for me. At least...when I was starting out. You'd think that doing storyboards would be similar to doing comics...but it's not. Comics require a skill for consolidating and economizing panels. What I mean by this is...in storyboards...we can draw 8 panels of someone opening a bottle...but in comics...in one panel...you may have to show someone opening a bottle with 12 breakdancers spinning in the background while a meteor shower is happening. And all of it has to read and be clear.
That kind of discipline is also similar to one panel gag cartoons where many elements need to read to form the gag in one picture. This was definitely a challenge for me.
The other difficult thing...was deciding what style I was going to do it in. Since I'm not a comics guy...I had no set way of doing things. This was VERY difficult..and there were several attempts at the first page. I finally decided to do something in a limited palette....Grey tones and B&W...and I used red for effect.
I was actually pleased with the finished result...and the best part of this experience was...I had so much fun doing it..I think I will continue this comic...and see where the story goes...I'll keep ya posted..In the meantime..Look for the anthology when it hits the shelves. In the meantime...here's a preview of 2 of the pages(not in order): 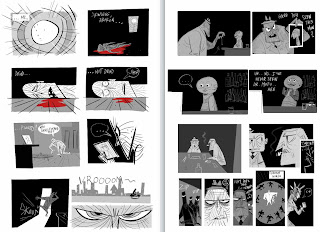